Why the World’s Population is Only 7.8 Billion

Ocnil enjoys sunny days at the park, and rainy days at the pool. He is still contemplating whether or not to buy a certain waterbed. He also love gramer, speling, and other language related stuff. He has a pet duck named Lincoln. 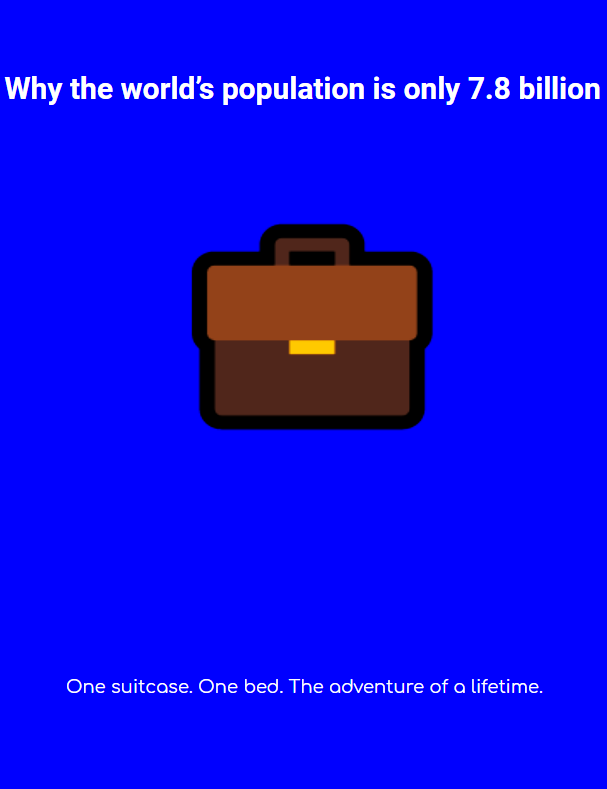 This book is dedicated to my breakfast bagel.

The following letter has been retrieved from an archive, and is believed to have been written by Jim Nlocnil. 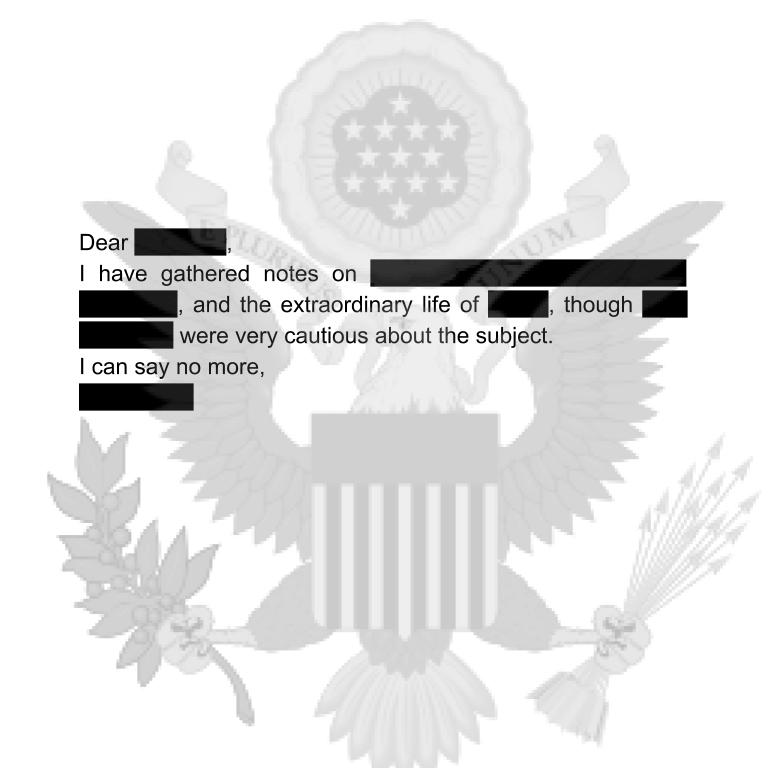 There was a suitcase. There was a bed. What was it doing there?  The bed was the first bed that the legendary bedmaker would make. Now, the bed maker would prefer if his name was not mentioned in this book, though it perplexes me, for he is already quite famous indeed. But from here on out, I will call the legendary bedmaker “Gustavo.” Now Gustavo was not always famous, for he grew up in a humble cottage in an island on the Sardinian sea. This island was called Sicily, and it was quite a magnificent island indeed, for tourism and commercialization had not found the island yet, letting the locals there live a happy life with no one to disturb them.

Now Gustavo had a father named Monee, who, despite the name, was a very poor bedmaker. One day, Monee stumbled across a stream. He looked into the stream. He then walked away. Another day, he ran into a beautiful untouched beach, and when he put his hand into the pristine crystal waters, it was a pleasant temperature, refreshingly cool, but not uncomfortable. He took off his hat and filled it with the water, and took the hat full of water home. Now Monee was quite a forgetful man, and he forgot to show the fresh pure Water to his family. The next morning, to his surprise, the water was still the same perfect temperature it had been when he first discovered it. He was intrigued, but not frightened by this discovery, for he was still curious about this liquid. He went back to the beach, and, sure enough, the water was exactly the same temperature it had been the afternoon he had found it. Monee’s mind instantly whirred into action, thinking about the possibilities of making this water into a product he could sell.

The first thing I should do, he thought, is tell Gustavo. As soon as Gustavo had heard about this “cool water” he got some leather, sewed together a water tight bed, and filled the bed with the water. And, though Monee and Gustavo did not know it, they had just created the first water bed. Monee saved up his savings, and soon, they patented this water bed, though they did not mention this, for they wanted to keep the water a secret.

Jakub sighed. He and his best friend, Filip, had made a secret organization for boys like them. They had “special power”, though it was more like a curse. They could do “amazing things” like climb up brick walls and shoot energy from their fingers. This did nothing against the tanks, soldiers, machine guns, and other terrible things that the Nazis used to invade. But because of these “special powers” they were targeted by soldiers, who were ordered to execute any boy who used “magic”. Jakub probably had the worst power of all. He could see and hear through any solid object. What use was seeing a tank when it was about to shoot a shell at you? The other boys were younger than him, but were far more powerful. They respected him, though, for he was the leader.

The soldiers! Jakub and the other boys dove behind a bush as Filip started making hand signs to release an energy shield. Another boy closed his eyes and opened them, although this time his eyes were red. He looked at a soldier and instantly paralyzed him.

“Jakub, help! My shield is going down!” Filip screamed.

Filip only had enough energy to sustain the energy shield for a few minutes, but that, until then, had been plenty enough time. It seemed that the soldiers heard Filip too, because they instantly rushed his way.

They had Filip. Without his shield, he was helpless, and one of them was dragging Filip onto the jeep while the other one held a rifle to his head.

“You can’t do this!” Jakub screamed.

By then, the jeep had driven off to the forest, and the only person who could see and hear Filip was Jakub. The last words that Filip uttered before he passed out were “under the bench.”

Meanwhile, Gustavo and Monee were raking in the profits from their successful bed making business. The beach still looked untouched, and Monee suspected, though they had drained many gallons of liquid from it, that the beach would still make more.

“Gustavo,” Monee said “when I die, you have the choice to lead the company. Will you continue the family legacy?”

“Of course I will!” Gustavo exclaimed. “but I hope that I do not take it over soon.”

“Rumor has it that there is a habitable planet only 2,500 light years away!” Bob said.

Bob and his family lived on a planet called Logic, and it was about to explode. It was rumbling violently, and they needed to get off it as soon as possible.They first considered moving to the puny moon, Ableton, or the dwarf planet, FL Studio, which was circa 600 light years away. But they then discovered that the planet would make such a shockwave that all of the habitable planets and moons would be terminated. The scientists of their colony searched desperately for a habitable planet, and it seemed that they had found one.

“Okay, mom. My UltraBomb is not going with me, right?” Tommy said.

“Of course it is! Now come on!” Martha said.

The UltraBomb was a safety device that some scientists had discovered in the period of renaissance. They had discovered many things, but this UltraBomb was by far the coolest. A child, if threatened, could deploy this UltraBomb and Vaporize every living thing except itself for a 1,000 mile radius. To trigger it, you needed to pour a special type of liquid onto a compressed plasma ball. It would then kill everything around it except for the child itself. The Logic government issued UltraBombs to every kid colonizing on earth, but they were strictly told to only use it if necessary. Tommy thought they went overboard on the liquid, though. They brought more than a thousand gallons!!!

Tommy sat down in his seat and prepared himself for this new adventure.

The following snippet has been retrieved from an archive, and is believed to have been an advertisement from “Palermo Daily”. 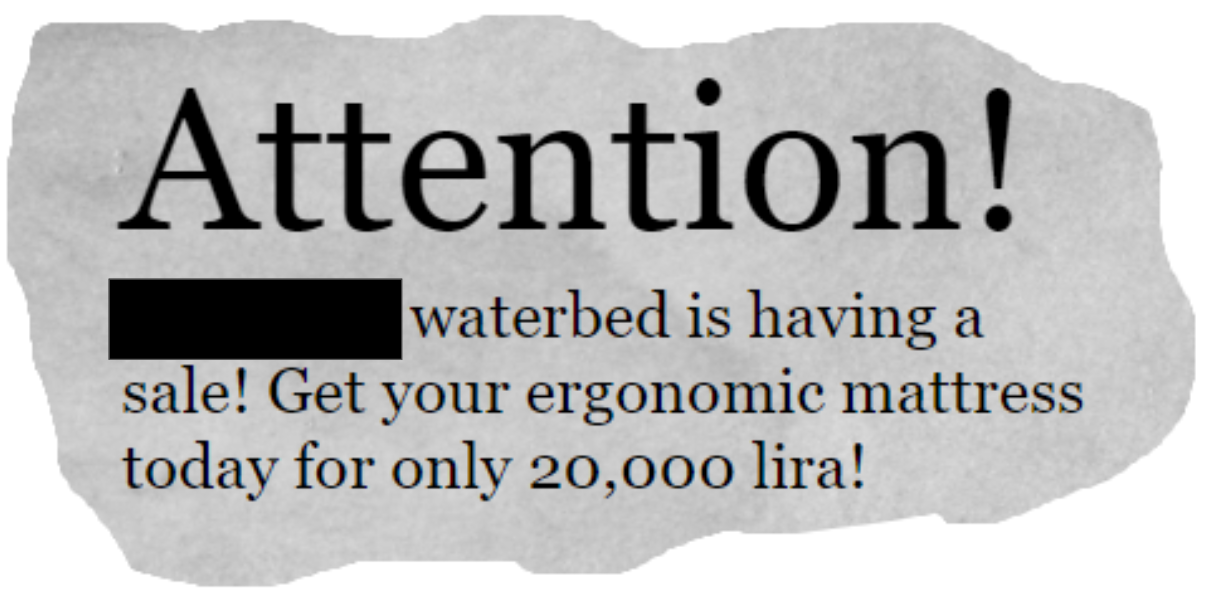 Gustavo flopped down on one of his many waterbeds and cried. His father had died the day before today, and he was sad. Even worse, he had to give a speech at the funeral, and his words were unrecognizable from his sobs. But he had to move on, and keep the family legacy.

Stress. SO much stress. Gustavo had reformed the waterbed, spreading business outside of Sicily, and it was spreading quickly. He had also put advertisements in newspapers all around the world, and his company had gone public. (NASDAQ, GWB ^1.27%,1598.7) The Mariott had replaced all of their beds with Gustavo’s, and his business was doing well. Gustavo was having a good life.

Under the bench, under  the bench, under the bench. Jakub kept rolling this around in his head. What? He had checked under every bench he had seen for the past year. Unless… The stone bench!!! Filip had chiseled a miniature stone bench for Jakub, but before he could snatch it, Filip had thrown it way off into the woods to tease Jakub. Jakub thought that Filip had thrown it in a random direction, but Filip was very precise with his arm, so Jakub now knew that was not the case. Jakub searched for hours and hours in the dark woods, when he found the bench. He dug the soil under it, and found a mysterious ball of light.

Filip was dead. Who cared about him anyways? Jakub had been trying to sell this weird ball of light to museums, but they said it was just some lights in a glass ball. He slammed the suitcase (containing the ball) onto the bed. The waterbed bursted, and the suitcase cracked open. The ball bounced out and fell into the liquid.

The following letter has been retrieved from an archive, and is now known to have been written by “Zadinsky”. 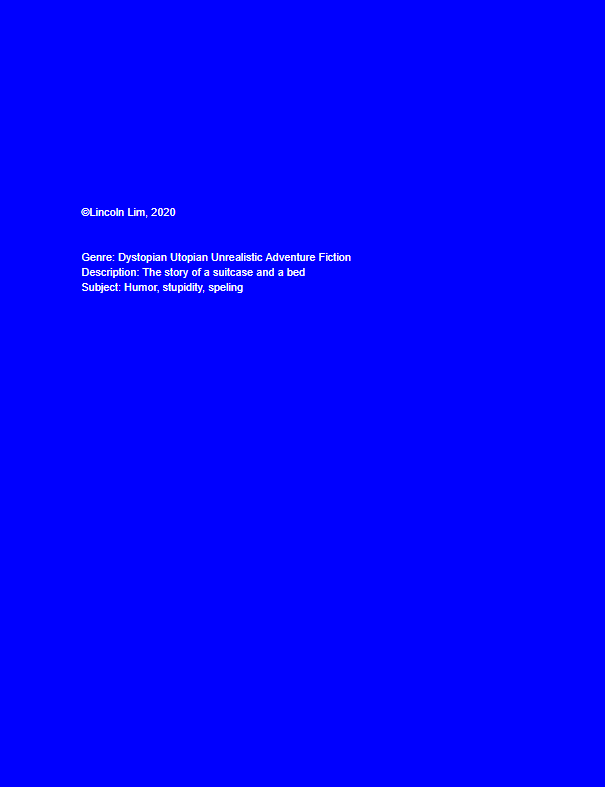